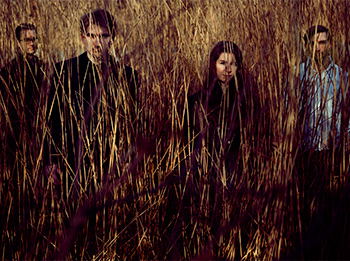 “…the sonic scree of ‘The First Cause’, crumbling post-rock spire of ‘Parachutes Forever’ and ‘Fast Cars, Clean Bodies’ towering peaks of bass and guitar. You might need a Sherpa to get through it, but the view from the top is magnificent.” – Rave Magazine

Across the expansive terrain of Heresy and Rite, produced by Jonas Munk (Manual), Salli Lunn are utterly bewitching, weaving dark magic in the bleak hinterland of guitar-driven atmospherics, stirring in equal parts pop melody and angular noise. From the tumbling drums and lurching coda of opener ‘The Frame of Reference’ to the stunning finale ‘The First Cause’, Salli Lunn walk a tightrope between bright-eyed songcraft and shadowy textures that threaten to overwhelm. Songs rise and fall in vertiginous shifts, carried by thunderous rhythms, skewed guitar patterns and the compelling vocal presence of Lasse Skjold Bertelsen, each a superb demonstration of Salli Lunn’s mastery of light and shade. Chiming guitar arpeggios highlight the hope and yearning woven throughout the album, while thick coils of bass, pounding drums and wrenching chord changes deepen the atmosphere of foreboding and menace. The album was mixed and produced by Jonas Munk (Manual, Causa Sui) and mastered by Anders Schumann (Oh No Ono, Decorate Decorate, Death By Kite).

Salli Lunn formed in 2001 in the Danish harbour town of Frederikshavn. Three of the four members – Lasse Skjold Bertelsen (vocals and guitars), Line Grønbech (drums and percussion) and Christian Blæhr (guitars and keyboards) – have played as a band for nearly a decade, recently joined by Jan Nissen (bass) to create a line-up that is musically adroit as it is dynamic and powerful. With members of the band playing in other acclaimed acts The Late Parade, Death By Kite and Amber, it is only in recent years that the music of Salli Lunn has received the devotion it demands.

Salli Lunn have supported numerous acclaimed international bands, including Jeniferever, USA Is A Monster and Extra Life. Songs from Heresy and Rite were debuted in Copenhagen and Aarhus in the spring of 2009, where the magazine Soundvenue booked the band for a number of shows. The album was produced and mixed by Jonas Munk (Manual, Causa Sui) and mastered by Anders Schumann (Oh No Ono, Decorate Decorate, Death By Kite). 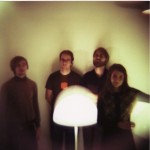 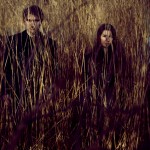 Salli Lunn’s music is  available for licensing (master & sync cleared) through Hidden Shoal. Please contact us with some basic details about your project and the track(s) you wish to use and we’ll be sure to get back to you straight away.