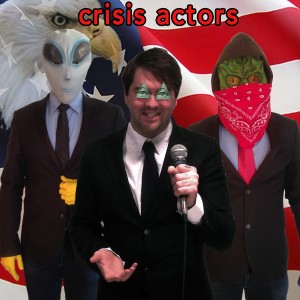 Crisis Actors are not real people. They are a group of actors intent on exposing the corruption and lies of mainstream media. They are meta-conspiracists, investigative citizen journalists, and proud patriots, America’s sons. Their sludgy garage rock debut White Guilt, White Heat EP is a surge of righteous disgust, a tidal wave of guitar filth set to choke all hypocrites, corporate puppets and environmental rapists in their path.

White Guilt, White Heat is the debut EP by shadowy collective Crisis Actors. Hidden Shoal received the encrypted digital files via a portal in the dark web, accompanied by the following text: “Crisis Actors are not real people. They are a group of actors – Steve Illuminati, Todd Reptilian and Cory Alien – intent on exposing the corruption and lies of mainstream media. They are meta-conspiracists, investigative citizen journalists, and proud patriots, America’s sons.” The digital files comprise five sludgy garage rock salvos, a surge of righteous disgust, a tidal wave of guitar filth set to choke all hypocrites, corporate puppets and environmental rapists in their path. Rumours abound that there may be some link between Crisis Actors and Hidden Shoal labelmates Brother Earth, but such links can be neither confirmed nor denied. Hidden Shoal maintains they are proudly complicit in disseminating these seeds of illumination.

Based in cities around the globe such as New York, London, Tokyo, Cleveland and Washington DC, Crisis Actors – Steve Illuminati, Todd Reptilian and Cory Alien – first met on 16th June 2015 at Trump Towers in NYC, when the future band members were hired by Donald Trump’s campaign team as paid stand-in supporters for his campaign announcement. Although members of the group have individually taken part in conspiracies all over America and beyond, the Trump campaign announcement was the nexus of their formation. “We thought, on that day, that we would all receive our gift cards for $35 and go home. But once Cory Alien and I started talking about our involvement in past events and our proclivity for music, and Todd Reptilian overheard us, we knew we had something special,” says Steve Illuminati, lead singer of Crisis Actors. “We realised there is a sub-conspiracy going on. At the event, there were paid actors playing paid actors playing real people, possibly hired by Hillary Clinton’s campaign, and the real Donald Trump himself was seen behind a curtain while what appeared to be a cyborg of some sort was making his announcement. Re-watch the YouTube videos. It’s all there. We were just able to see it at a better angle.”

It was then that Crisis Actors knew they had to expose these deeply entrenched conspiracies plaguing the corporate mainstream media. “When Rand Paul talks about anarcho-capitalism,” Cory Alien chimes in, “you may think he’s talking about individuals’ freedoms, or Koch corporate free-for-alls, but he’s actually planting the seed of a highly technological form of electronic libertarian mind control. Why do you think most smartphones are free when you sign up, but they charge you for security features without your consent?” Todd Reptilian, musical overlord of the band, chimes in, “What we see in America today, it’s all prophesied in the patterns of Ted Cruz’s hair. If you look at his head straight on, you can see the hair go forcefully upwards, then a quick swerve to the left on one side, and a massive swirl directly back on the right. Looking from the top of his head, the future is even scarier.”

Crisis Actors denounce mainstream media’s controlled narrative that fails to speak about the real issues facing America today. Crisis Actors also denounce the flood of big money in election campaigns, spent on subterranean bus systems to transport reptilian workers and caucus-goers above ground while the general public is oblivious, the scum of special interests trying to willfully confuse American citizens by subliminally injecting naked pictures of Bill O’Reilly in between segments on Fox News, those corporations getting the public to vote against their own interests by creating voting machines that can be controlled by psychokinesis, and the greasy-faced pundits who willfully perpetrate these lies and false narratives for the affection of their corporate overlords and their own economic gain to the peril of their fellow man, nations, and our Earth.

No reviews yet, sorry! 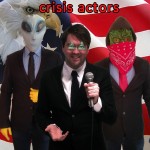 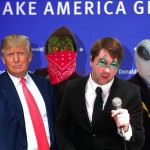 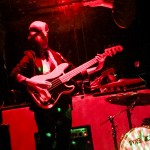 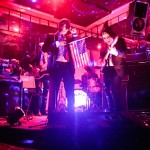 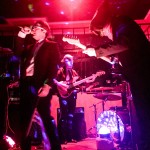 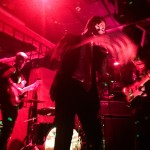 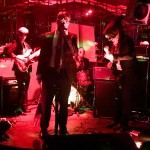 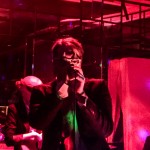 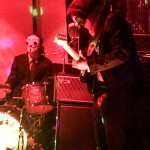 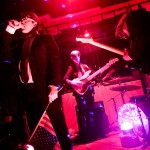 Crisis Actors’ music is  available for licensing (master & sync cleared) through Hidden Shoal. Please contact us with some basic details about your project and the track(s) you wish to use and we’ll be sure to get back to you straight away.