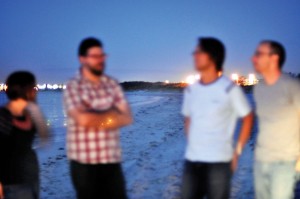 Shades of ambience flow into moments of shoegaze rock, turning through melancholic piano arcs and following the well-trodden path of obscure narrative. No manifesto, no thesis, no all-encompassing mantra. Just experimentation with guitars, keyboards and samplers, and a feeling that music should, in some instances, be allowed to evolve as an entity of itself.

I Haven’t Got It In Me

On third full length album I Haven’t Got It In Me, My Majestic Star continue to showcase their exceptional command of atmosphere and tension. The album sees My Majestic Star merge weightless daydream pop with droning shoegaze and even a smattering of slowcore. Haven’t Got It In Me” expands upon the immersive and dynamic soundscapes of previous My Majestic Star releases with its lush and subtle songcraft, and for the first time features the stunning vocals of the bands cellist, Miriam Braun, alongside Chris Masons distinctively dreamy tones. The album swims in uppers and downers, all the while painting an intimate yet brooding landscape for the listener to traverse.

Too Late, The Day

Expanding upon the emotionally-stirring instrumental palette of debut album Ideas Are The Answer and the stunning follow-up EP Fining, Too Late, The Day immerses the listener in its warm, enveloping drones, woven guitars and shoegazing songcraft for 45 minutes of sonic wonder. Including the stunning single ‘and having a reason why’, which features Chris Mason’s gorgeous reverb-soaked vocals for the first time on a My Majestic Star release, Too Late, The Day is deliberately non-literal – it doesn’t so much tell a story, but rather provides a bed within which to tell your own. It is the soundtrack to a waking fiction, a soft-focus reverie. While so many albums in this area deliberately evoke wide-open vistas and apocalyptic atmospheres, Too Late, The Day is more of an exercise in intimacy and engagement.

On this wonderful follow up EP to Ideas are the Answer, My Majestic Star have produced a work that is at once luscious and lonely. Its gorgeous hanging guitar tones weave themselves around layered synths and syncopated drums. The EP’s five tracks each draw their own melodic atmosphere and bear witness to a wonderful paradoxical emotional tenor – a kind of hopeful melancholy.

Ideas Are The Answer

My Majestic Star lay down an expansive palette on their debut release. A patchwork of light and shade where shades of ambience flow into moments of shoegazing post rock. No manifesto, no thesis, no all-encompassing mantra. A beautiful layered weaving of guitars and samplers.

My Majestic Star began as a solo recording project for Perth artist Chris Mason (Chris Mason Implosion, Glassacre). The motivation was to experiment with guitars, samplers and keyboards to create music that evolved naturally of its own volition. With a background in, and love for, shoegaze and post-rock, the result was a melding of fuzzed-out ambience and shimmering, haunting melodies, which culminated in the release of the first My Majestic Star album Ideas Are the Answer. Recorded entirely by Mason, the album is a collection of tracks meant to evoke the listener’s own interpretations, resulting in music of a non-narrative nature that nevertheless seeks to tell a story or, more accurately, allow the listener to create their own. The follow-up EP Fining continued this ethic but also introduced pop elements into the mix.

With the recent release of the new album Too Late, The Day, My Majestic Star has taken the next step and evolved into a live act. With the addition of friends who also happen to be ridiculously talented musicians – Miriam Braun (Tragic Delicate), Stuart Medley (Benji, Fur Versions, Motor Eye) and Jamie Hamilton (PB, M-16’s) – My Majestic Star live is more raw, urgent and self-evolving than the recorded material. The purpose is to not simply play the songs as they have been recorded but to adapt them to a live environment – to allow them to take on a life of their own and develop with each performance.

My Majestic Star Too Late, The Day Album release

My Majestic Star ‘and having a reason why’ single release 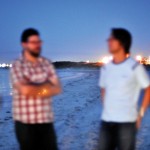 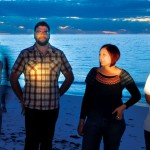 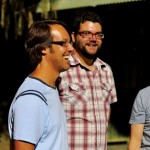 My Majestic Star’s music is  available for licensing (master & sync cleared) through Hidden Shoal. Please contact us with some basic details about your project and the track(s) you wish to use and we’ll be sure to get back to you straight away.