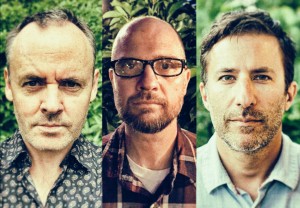 AWMA take the space, weight and atmosphere of their previous incarnation Half Film and inject instrumental details and a gentle shift in tempo from their slowcore origins. The band dynamic that Conor Devlin ([the] caseworker), Jason Lakis and Dan Martin (both of The Red Thread, Mist and Mast) have cultivated over the years of touring and playing together has been elegantly renewed. This melodically charged music exudes intensity and emotional resonance.

Sterling Hayden and the Great Nobility

Right from the opening notes of delayed guitar and the warm thrum of bass, ‘Sterling Hayden and the Great Nobility’ establishes itself as a songscape that’s in it for the long haul. The spacious six- and four-string interplay creates a gorgeous atmosphere, through which the drums steadily surge, like car headlights through fog. It’s not until five minutes in that Conor Devlin’s voice colours the song with impressionistic invocations, before the back half builds in intensity with fuzz bass and then reaches a cymbal-washed climax. The song was recorded in one take by Monte Vallier at Ruminator Audio in San Francisco. No one in the band remembers anything about the origin of the title…

The band dynamic that Conor and Eimer Devlin ([the] caseworker) and Jason Lakis (The Red Thread, Mist and Mast) have cultivated over the years of touring and playing together as Half Film has been elegantly renewed on their self-titled EP. This melodically charged music, akin to the early pastoral side of Pink Floyd, exudes intensity and emotional resonance. The EP features the single ‘Broadcast History’, which prowls relentlessly around a circular guitar refrain, gradually building in intensity as Jason Lakis’s expansive guitar effects and Conor Devlin’s incantatory vocal colour the stereo field with portent. AWMA take the space, weight and atmosphere of Half Film, and inject instrumental details and a gentle shift in tempo from their slowcore origins.

AWMA (A Woman My Age) is a trio made up of ex-members of the San Francisco-based bands Half Film, The Red Thread and Mist and Mast: Conor Devlin (vocals, guitar), Jason Lakis (vocals, guitar and bass) and Dan Martin (drums). AWMA was conceived in 2014 and the first recordings took place in 2015. This new EP was recorded live to tape in late 2016 at Ruminator Audio in San Francisco. Songs are pieced together via transatlantic email, and the band meets in Berkeley twice a year to record. They even play out sometimes.

Jason and Dan live in Berkeley, while Conor lives in Switzerland. 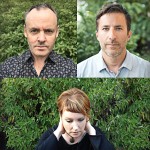 AWMA’s music is  available for licensing (master & sync cleared) through Hidden Shoal. Please contact us with some basic details about your project and the track(s) you wish to use and we’ll be sure to get back to you straight away.