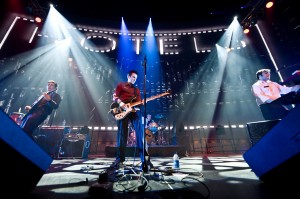 “Hotels fuse elements of new wave, goth, and surf so seamlessly that genre tags will be the last thing on your mind when you hear their bittersweet, atmospheric pop songs” – Time Out New York

Travel. Romance. Solitude. Rest…
Welcome to where hearts go broke. Walk the halls late at night; behind each door is a story – end credits for films never made, songs for dancers with tears and smoke in their eyes, soundtracks to star-crossed love. Post-punk basslines, Swedish pop melodies, cavernous surf guitar, washes of sad movie strings echo down the hall. Enjoy your stay.

Part three of the movie-themed Cinemascope trilogy of EPs.

Part two of the movie-themed Cinemascope trilogy of EPs.

The first installment in the movie-themed Cinemascope trilogy of EPs.

On The Casino Floor

On The Casino Floor sees Hotels take their addictive and singular meld of post-punk, shoegaze rock and cinematic pop and launch it into outer space. The band has managed to leap headlong beyond the consummate songcraft of acclaimed sophomore album Where Hearts Go Broke into the creation of a wildly inventive and immersive song-suite. The concept album’s seven masterful cuts tell the story of a secret agent, his former mentor and current arch-nemesis, and a nefarious prince’s plan to destroy Earth during the grand opening of the universe’s only outer space casino complex… The scene for this epic adventure is set by ‘From The West’, Blake Madden’s mellifluous baritone imparting a romantic yet edgy tale in which “love becomes a home” over tumbling drums and wooshing synths. This initial propulsion is halted by the gorgeous Brian-Wilson-meets-Mercury-Rev melancholy of ‘Lonely Islands’, with its shimmering yet hesitant melodies and fuzz-bass crescendos. The title track is perhaps the album’s dreamiest and most uplifting cut, enrapturing the listener with over seven minutes of majestic astral pop, before noir-punk single ‘The Bat Watusi’ ups the tempo with its insistent rhythm section, sci-fi synths and unashamedly rocking guitars. The song repeatedly strips itself back  to a muscular yet dreamy core, only to build into a tight celestial rock frenzy. The brief instrumental ‘Smith Lands On The Casino Planet’ reprises the synth theme of ‘From The West’ before ‘Trouble At The Consulate’ darkens the mood. Akin to prime New Order, its reverb-laden bassline, metronomic drums and yearning synths muster a brooding anxiety-disco vibe. Then, the cascading guitars of finale ‘Sleep In Fame’ bring to mind the John Barry theme to the classic Bond movie You Only Live Twice, doused in some of the best shoegaze and dream-rock dynamics you’re likely to hear. It’s the perfect goosebump-raising send-off to an incredible album, tying up the album’s narrative ideas before the final credits roll.

‘The Heart That Hears Like A Bat’ is a song as wonderful as its title, a gorgeously shadowy piece of film noir Bond pop. Tremolo guitars and vibraphone shimmer over the inimitable Hotels rhythm section like moonlight on a swimming pool, while Blake Madden intones a pulpy tale of “young girls crying” and “young lovers dying”. It’s beautiful, effortlessly cool, and once again proves Hotels as kings of pop melody and mood. To round out the release come remixes of two more tracks from Where Hearts Go Broke. ‘Leilani’ is remixed by original Hotels keyboard player Rich Spitzer, AKA Nite Club, who pairs the catchy synth line and vocals of the original with a drum ’n’ bass racket. Bizarre, funky and addictive. ‘Near The Desert, Near The City’ is remixed by Perth’s Justin Manzano, AKA tin Man, who has also remixed Hidden Shoal’s Apricot Rail. tin Man foregrounds the aching nuances of the original by stripping it back and laying the bare bones of the song in a shimmering bath of shoegaze drone and dubby throb.

From the opening salvo of single ‘Hydra’ to glorious finale ‘Flight Of The Navigator’, Where Hearts Go Broke takes the listener on a thrilling musical journey through airports, streets, bars and, yes, hotels, populated with people falling in and out of love, lost in the gutter but always looking to the stars. This is the most relentlessly paced, hauntingly melodic, damn catchy pop music you’ve never heard, each song an end credit for the weary traveller or the romantic dancer; a tune you should listen to just before you die. Throughout this addictive album, crisp, propulsive drumming and beautifully melodic bass are buoyed up by sizzling synths and chiming guitars, with Blake Madden intoning urgent, compelling vocal lines. It’s all here: the swooning nu-gaze surge of ‘Near The Desert, Near The City’; the edgy guitar clang of ‘Port Of Saints’; the gorgeous Bond-esque epic ‘The Heart The Hears Like A Bat’, with its tremolo guitar and vibraphone rippling out into the night; and the impossibly sublime ‘Café Martinique’, where the tumbling majesty of Joy Division meets fast-paced chamber pop, with one of the most blissed-out finales you’re likely to hear.

Hotels is the moniker of composer and bassist Blake Madden. Founded in New York in 2003, Hotels presented a unique synth-heavy mix of dark post-punk and upbeat new wave pop, on display on the band’s 2005 self-released debut Thank You For Choosing… Madden moved to Seattle in 2006, creating two different divisions of the band on opposite coasts, both of which can be heard on their 2009 follow-up and Hidden Shoal debut Where Hearts Go Broke. Soon after, Madden folded the New York division to concentrate on creating music in Seattle, where Hotels performed at festivals like Bumbershoot and Capitol Hill Block Party, and were in regular rotation on Seattle’s KEXP radio. In 2011, Hotels recorded the intergalactic Bond-esque concept album On The Casino Floor, followed by a movie-themed trilogy of EPs entitled Cinemascope (2012–13).

Currently, Madden is at work on the first new full-length Hotels album in over four years, Night Showers. In a deliberate break from tradition, Madden has left out the synthesizers that defined the Hotels sound for years, instead augmenting a standard bass, drums, and guitar line-up with a fresh new combination of vibes, trumpet, violin, and viola. Night Showers is set to be recorded and released in late 2015/early 2016. 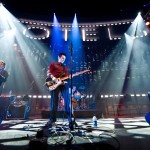 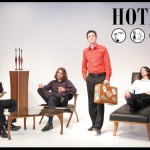 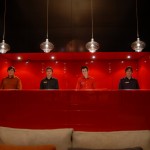 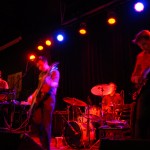 Hotels music is  available for licensing (master & sync cleared) through Hidden Shoal. Please contact us with some basic details about your project and the track(s) you wish to use and we’ll be sure to get back to you straight away.