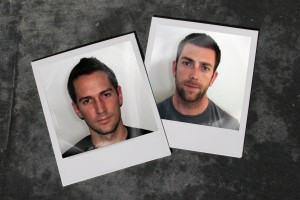 “The EP rattles as much as it hums. It prods the subconscious with an array of sounds at once. For those who find Four Tet’s stuff a little tough on the melodies, you should know Down Review manages to escape that fate with an EP rich with color and promise.” – PopMatters

Medard Fischer (Arc Lab) and Tim Arndt (Near The Parenthesis) have never met nor even spoken. But from their online musical collaboration comes Down Review, melding their unique sensibilities to create a delicious hybrid – warm, human electronica for alienating times.

From Here, For Anyone

Down Review is the new collaboration between Arc Lab and Near The Parenthesis. Their debut EP, From Here, For Anyone, is a captivating travelogue of luscious sprawl and purpose. The EP kicks off with the single ‘Anything Is Everything’, a post-midnight drive through a flaking neon city. Crisp programmed drums, warm synths and surging bass weave through a mist of skittering textures and falling light particles. Then, there’s the urgent phasing science of ‘Archive’, the outer planetary dub of ‘Always Enough’, and the creeping, insistent epic ‘All In’. It’s the kind of glowing electronica that could loop endlessly, such is the allure of its ebullient, cyclical melodies.

US-based electronic producers Tim Arndt (Near The Parenthesis) and Medard Fischer (Arc Lab) formed Down Review in 2007. They ‘met’ online for the first time through their debut label, Toronto-based MMBP, and developed immediate respect and admiration for each other’s work.

Down Review’s initial collaboration was featured on Near the Parenthesis’ album Of Soft Construction (n5MD, 2007). Their work on the track ‘Sitting in a Room’ was clearly a departure from the typical NTP aesthetic, situating Medard’s drum-programming wizardry and signature basslines beneath Arndt’s more ethereal creations. The result was arguably the album’s stand-out track, which “rather anomalously adds bass-heavy funkiness to the sparkling flow” (Textura).

In addition to releasing their debut EP From Here, For Anyone through Hidden Shoal (11th August, 2009), Down Review have submitted two tracks to the Sutemos net-label, one a remix of Leon Somov’s ‘Mano’ (featuring Jazzu), and a new track for the upcoming compilation Intelligent Toys 6.

From Here, For Anyone EP Release 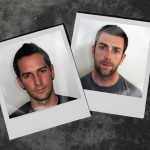 Down Review’s music is  available for licensing (master & sync cleared) through Hidden Shoal. Please contact us with some basic details about your project and the track(s) you wish to use and we’ll be sure to get back to you straight away.