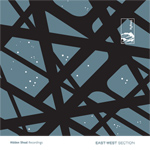 As part of our 5th birthday celebrations, during the month of May we’ll be looking back at the history of Hidden Shoal, year by year, casting some light on artists and releases that may have been overlooked. For one week, all releases covered below will be available from the Hidden Shoal Store with a 35% discount. Flavoursome!

2008 saw the release of a fresh new raft of superb albums and EPs, including those by new signings The Slow Beings, Fall Electric and City Of Satellites from Australia, Ghost In The Water and Rich Bennett from the USA, and RL/VL from Ireland. HSR stalwarts Tangled Star, Toby Richardson, My Majestic Star, Iretsu, Slow Dancing Society and Sankt Otten all followed up with some of their most critically acclaimed work. And at the end of the year we released compilation album East–West Section, volume four in our free download series.

As acclaim for our artists spread internationally, we were delighted to hear that prominent New York radio host DJ Mojo dubbed the label “this generation’s 4AD”. As huge fans of the classic label, this was a massive and humbling compliment.