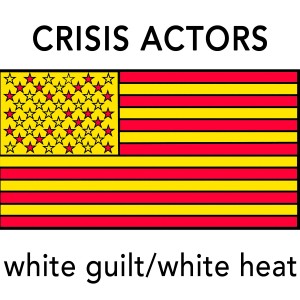 We have a dirty little secret we’ve been keeping up until now. We’ve been given security clearance to finally to announce the release of White Guilt, White Heat, the debut EP of incendiary guitar filth from shadowy collective Crisis Actors, accompanied by the video for lead track ‘Welcome To Babylon’.

Hidden Shoal received the encrypted digital files via a portal in the dark web, accompanied by the following text: “Crisis Actors are not real people. They are a group of actors – Steve Illuminati, Todd Reptilian and Cory Alien – intent on exposing the corruption and lies of mainstream media. They are meta-conspiracists, investigative citizen journalists, and proud patriots, America’s sons.” The digital files comprise five sludgy garage rock salvos, a surge of righteous disgust, a tidal wave of guitar filth set to choke all hypocrites, corporate puppets and environmental rapists in their path. Rumours abound that there may be some link between Crisis Actors and Hidden Shoal labelmates Brother Earth, but such links can be neither confirmed nor denied. Hidden Shoal maintains they are proudly complicit in disseminating these seeds of illumination.

Read more about Crisis Actors here, grab yourself a copy of the EP here (pay what you want) here and check out the awesome music video for ‘Welcome To Babylon” here.