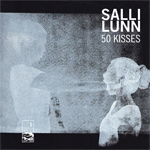 Hidden Shoal is excited to  announce the release of single ‘50 Kisses (TV-Baby Remix)’ by Danish spectral noise-rock quartet Salli Lunn, taken from their recently released album A Frame of Reference, which comprises remixes of songs from their debut album Heresy and Rite, plus all-new songs.

‘50 Kisses (TV-Baby Remix)’ sees the previously unreleased track from the Heresy and Rite sessions reworked by Denmark’s TV-Baby as a driving, lo-fi chase scene. The track hurtles through your brain like a delirious late-night panic attack, rapid-fire beats ricocheting against woolly bass surge, disorientating echoes and electro squiggles. Then, in its closing seconds, a gorgeous coda of chiming interwoven guitars lulls you to a narcotized sleep, the chaos of the preceding minutes a distant dream.

“The Danish noise rockers show on A Frame of Reference the hidden depth of many of their prior songs, as well as willingness to re-envision them on the fly… This is no stopgap release, but an extension of Salli Lunn’s growing confidence… The band’s blend of Krautrock, shoegaze, techno and straight on melodic rock is an addicting stew.” – Music Emissions on A Frame of Reference