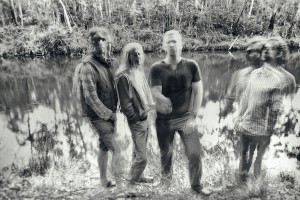 Summon the Birds flash out the shadows of the sky, spinning tales of fallen kings, dissected criminals, Arctic exploration, cloud riding and London rain. The canvas weaving these disparate threads together is the ornate musical setting in which the song-stories become an unflinching and expanding whole. Imagine latter-day Talk Talk picking the locks to Spoon’s basement as The Drones circle, restless, looking for the pink pill…

The seeds of Blood Love were sown back in 2009, with song sketches massaged into shape in the band’s rehearsal room. Labyrinthine pieces like ‘The Anatomy Lesson’ – based on the famous painting by Rembrandt – nine-minute opus ‘Journey to the Centre of the Earth’ and instrumental tracks ‘Tactile Hallucination’ and ‘Cloud Cars’ realise the reach of the band’s ambition. Bookended by singles ‘Funeral for a King’ and ‘London Tap Water’, this six-track epic is testament to how powerful music can become when story and song interweave.

Funeral for a King (Single)

‘Funeral for a King’ is the new single by Melbourne band Summon the Birds, taken from their forthcoming second album, Blood Love, recorded by Tim Johnston (Nick Cave & The Bad Seeds, The Dandy Warhols, The Drones).

Like Zaphod Beeblebrox animated by Edgar Allan Poe, Summon the Birds have drunk the London tap water and are now poised for flight. Their second album Blood Love will see release on Hidden Shoal in late 2017 – imagine latter-day Talk Talk picking the locks to Spoon’s basement as The Drones circle, restless, looking for the pink pill…

Like Zaphod Beeblebrox animated by Edgar Allan Poe, Summon the Birds have drunk the London tap water, sent it along the spice roads of sound (Tim Johnston/John Ruberto) and are now poised for live flight. The five-piece live incarnation – including the most perfect organ sound heard since the Fall of Pompeii – are launching ‘London Tap Water’ at Melbourne venue the Yarra Hotel Abbotsford on Friday 11th August.

It’s the picture of the diggers by the foot of the Sphinx in Egypt in 1915 that gives the clue: the digger, once so low a foot soldier in the allied camps, now a rallying cry of national pride. This standalone track, originally intended for inclusion on second album Blood Love, reimagines the guttural slang and plays fast with the disparate meanings. Alternately dismissive and yearning, it’s a brutal, folk-operatic cry for legitimacy and love. Recorded in the mud heaps of Park Orchards, with western spaghetti on the stove top and analogue gear in a heap, ‘Digger’ is the last Summon the Birds track featuring the late, great Peter Woodlands on bass, mixing console and backing vocals.

The hexagram for the number 48 is The Well – the site of the town may change, but the well stays the same. The album 48 was caught on tape at Head Gap studios in 2007 by Brent Punshon during a meticulous five-day session, spearheaded by the late Peter Woodlands. The overdubbing and mixing process took place over the next five years, interrupted by volcanoes, divorce, recast hexagrams and band reshuffles. 48 was launched in 2012 almost exactly seven years after it began in blood, in a runic ceremony in Warrandyte.

Summon the Birds began in 2007, when singer-songwriter Jonathan Shaw and bassist/producer Peter Woodlands kicked up an idea for a record called 48, based on the iChing. Kris Arrowsmith joined on drums, with guitarist Tim Clarke seduced into the fray after the dissolution of instrumental shoegaze band Bury the Sound. 48 saw release in 2012, launched alongside Melbourne space-rock compatriots All India Radio, closely followed by single ‘Digger’ in 2013.

The seeds of second album Blood Love were sown back in 2009, with song sketches dreamt up by Shaw massaged into shape in the band’s Hurstbridge rehearsal room. These new songs had a lyrical intensity that lent itself to a more dynamic musical setting, inspired by Clarke’s measured guitar playing, tracing itself like gold wire over the regal patter of Arrowsmith’s drums and Woodlands’ bass runs. Labyrinthine pieces like ‘The Anatomy Lesson’ – based on the famous painting by Rembrandt – nine-minute opus ‘Journey to the Centre of the Earth’ and instrumental tracks ‘Tactile Hallucination’ and ‘Cloud Cars’ began to realise the reach of the band’s ambition.

In 2014, bassist Drew Corby replaced original member Peter Woodlands, and the recording of Blood Love began in earnest, bolstered by Paul Spurling on keyboards, Marlene Samson on backing vocals, and Adrian Perger on horns. Producer and engineer Tim Johnston (Nick Cave & The Bad Seeds, The Dandy Warhols, The Drones) oversaw the sessions and lent his golden ears to the mixes, and the album was mastered by John Ruberto (Courtney Barnett, The Drones, Electric Mary).

Blood Love is dedicated to the late Peter Woodlands, who died far too soon, but whose song rings on in the vault of the endless sky. 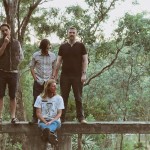 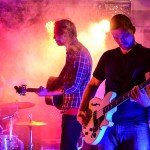 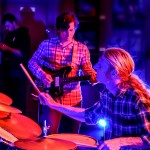 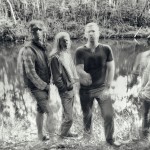 Summon The Birds’ music is  available for licensing (master & sync cleared) through Hidden Shoal. Please contact us with some basic details about your project and the track(s) you wish to use and we’ll be sure to get back to you straight away.