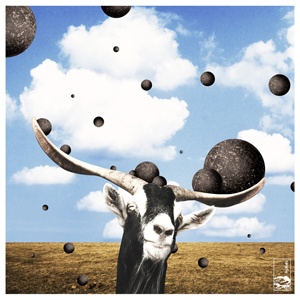 On Now We’re Active, Umpire combine sprawling indie-rock sounds with reflective melancholy, expertly wielding massive sun-drenched melodies, serpentine guitar parts and soaring vocals to spectacular effect. From lead single ‘Green Light District’ through the chiming guitar surge of ‘The Canyon’ to gorgeous finale ‘Cyclones Into Sunshowers’, Now We’re Active is a stunning release, as expansive as it is propulsive, as heartbreaking as it is life-affirming.

Immaculately produced by bassist Simon Struthers at Forensic Audio, the album’s ten tracks bring progressive rock influences, indie-pop sensibilities and shades of math-rock into explosive collision, then shape them into songs that are at once epic and intimate. After the last song fades you’re left with a lump in your throat and admiration of how Umpire’s songcraft and sonics are so consistently elegant, melodic and widescreen. Now We’re Active is much more than a collection of tracks – it’s an album that blossoms beautifully on repeat plays.

“Now We’re Active is an album which reveals a band whose imaginations are now finally within their own grasp as musicians. Alternately full on, grandiose and brilliantly inventive, Umpire have very nearly made a prog rock masterpiece, and I say nearly only because their more ambitious ideas are continuing to develop.” – DOA

“Beautiful, chiming guitar pop with layered, soaring vocals from the Perth band’s upcoming new album. Comes on like The Shins with more gumption. “Widescreen” (always a description that gets my attention), it says here, and I concur.” – The Underground of Happiness on ‘Supply Chins‘


Now We’re Active is available now on CD and digitally worldwide, distributed through Hidden Shoal in Australia and n5mailorder in the US and internationally. Head to the Hidden Shoal Store for all availability details. Read a full press release here and be sure to check out the fantastic music video for single ‘Green Light District‘.