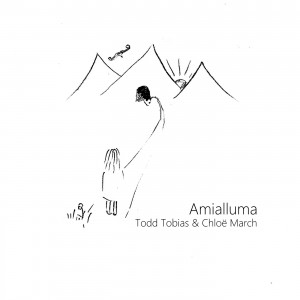 We’re proud to announce the official release of Amialluma, the stunning new collaboration between Todd Tobias and Chloe March. The album is available now via both the Todd Tobias and Chloe March Bandcamp pages, Tiny Room Records as well as all good 3rd party stores (iTunes, Spotify et al). This music is available for licensing across film, tv, games, web and beyond. Hit us up for more info.

After a number of track collaborations on Todd Tobias’s 2015 album Gila Man, Chloe March and Todd Tobias have joined forces on their new full-length, Amialluma. Dwelling in a mysterious hinterland somewhere between Cocteau Twins’ seminal Victorialand and The Caretaker’s Persistent Repetition of Phrases, Amialluma dances between the earthly and heavenly. Chloe March’s celestial voice shines a light through Todd Tobias’s dark, fantastical soundscapes, resulting in a sublime, uncanny experience that enraptures and unsettles in equal measure. Through a process of improvisation sparked by the emotive power of Tobias’s music, March developed a lyrical world of word-invention sung into archaic lullabies and tales. The lyrics centre around a child’s journey from the safety of its mother’s arms through an ancient, shadowy world. Overcoming fear and meeting with otherworldly guides, the child finds independence and reveals a deep connection with nature.