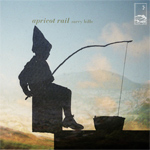 Hidden Shoal Recordings is proud to announce the release of the new freely downloadable single ‘Surry Hills’ by Perth-based multi-instrumental pop sextet Apricot Rail. The single follows on from their highly praised self-titled debut album of 2009.

“Imagine the ethereal pop of early Múm, the whimsy of Sigur Rós’ more optimistic moments, and (occasionally) the emotional edge of The Twilight Sad. This is consummate indie post-rock laced with Australiana, and well worth checking out.“ – Rave Magazine

‘Surry Hills’ gradually blooms from a shimmering haze of harmonics and ride cymbal into a delicious interweave of resonant guitars and woodwind melodies. The song’s restraint becomes its strength as the hairs on the back of your neck slowly rise. Inhabiting a similar sonic space to Sweden’s marvellous trio Tape, ‘Surry Hills’ is destined to garner a fresh new raft of fans for Apricot Rail’s addictive brand of melodic instrumental pop.

“…what genre-defining bands like Explosions in the Sky take eight or nine minutes to do Apricot Rail are capable of in three and a half. This impeccable sense for the immediacy of great pop structures is arguably one of their biggest assets, and is displayed masterfully on their debut album.” – Drum Media CD of the Week

Formed in 2008, Apricot Rail is Ambrose Nock (guitar), Jack Quirk (guitar), Matthew Saville (drums), Daniel Burt (bass), Mayuka Juber (clarinet/flute) and Justin Manzano (guitar/electronics). In November 2008, the then-quintet headed into Kingdom studios under the guidance of Simon Struthers (Umpire, Adam Said Galore, Mukaizake) to record their self-titled debut album, released on Hidden Shoal in 2009. Since its release, the album has been wowing fans and critics alike, with feature album status galore across Australian radio, charting in US college radio (including a number 1!), and receiving glowing reviews left, right and centre.

‘Surry Hills’ is available now as a free download from the Hidden Shoal Store, along with Apricot Rail’s self-titled debut album. The single is launched on 6th August at The Bakery in Perth – check out the Facebook event page for more info. Their forthcoming sophomore album will be released in 2012. In the second half of 2011 the band are proud to announce prestigious support slots with the likes of Marnie Stern and Akron/Family. Stay tuned for more details.