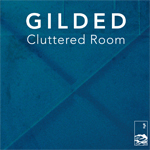 Hidden Shoal Recordings is proud to announce the release of ‘Cluttered Room’, the new freely downloadable single by Australian experimental/ambient duo Gilded, taken from their debut album Terrane, to be released on 8 October (CD pre-orders on 25 September). Buoyant and sun-dappled, ‘Cluttered Room’ takes a handful of gleaming musical elements – ride cymbal, banjo, bass, melodica, acoustic guitar – and builds them into a wonderfully considered and thoroughly melodic structure. Akin to the most accessible tracks by acclaimed Swedish trio Tape, Gilded’s debut single is an inviting entry point into their detailed and emotionally resonant soundworld.

The title of Gilded’s debut album Terrane comes from a geological formation that has become dislocated from its original position and sutured onto a new landscape. It retains its own distinctive form and contrasts against those around it, whilst also finding a new place, a new home. The compositions that make up this record strike at the heart of how it feels to be in a period of transition, of watching a subtle change, a shift in texture. There are moments of quietude and reflection – held together by the austere and alternately punctuated by shifts toward the uplifting and revelatory. Terrane deftly operates around the intersections of melody and texture, movement and pause.

Gilded will be supporting the release of Terrane with a national tour in October:

Grab the single from the Hidden Shoal Store and read a full press release here.