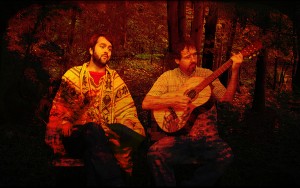 As promised in our previous post we have more fantastic news to share. We’re extremely excited to be able to announce the signing of American duo Brother Earth. The band will release the amazing full length Positive Haywires on 16th September preceded by two singles, the first of which drops next week (30th July)!  Positive Haywires vacillates between brooding textural pieces and exuberant rock’n’roll at the drop of a hat, chasing the ghosts of pop music past into a hall of cracked mirrors. It’s an amazing album and we can’t wait for you all to hear it.

Brother Earth is a collaboration between multi-instrumentalist/producer Todd Tobias and vocalist Steve Five. Todd’s darkly exotic instrumental music has featured on three Hidden Shoal releases to date (Medicine Show, Night Above Ground and I Razor). Todd is also a member of Circus Devils alongside brother Tim Tobias and vocalist Robert Pollard (Guided by Voices). Steve Five is the guitarist/vocalist/songwriter for the wonderful Brooklyn-based band The Library is on Fire.