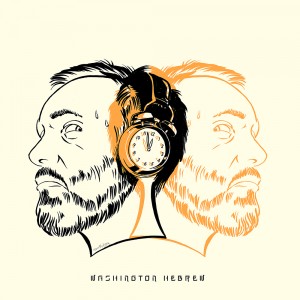 The time has come for this wild sonic ride to be unleashed upon the world. The debut solo album from Washington Hebrew (aka Michael Kentoff of The Caribbean) is now officially with us, available via Bandcamp and the usual online stores and streaming services. Featuring the brilliant single ‘Bank Holiday Wknd‘, Washington Hebrew acts as both a leap and bridge for Kentoff. Inspired by his use of samples and loops for installations, remixes and soundtrack projects, Kentoff has employed these raw materials to craft new songs akin to the wonderfully skewed and melodic pop of The Caribbean, but with a magic all its own.

In Michael’s own words, “I wanted Washington Hebrew to take what I loved of Chicago footwork, soundtracks, Dilla, and broken beats, take existing sounds and music, sample them, chop them up (often beyond recognition), and create completely new hooks and songs out of the raw, pulpy material. Recorded largely (although not entirely) alone, I was able to work on the nine songs making up Washington Hebrew in the studio, at coffee shops, at work, helping the record radiate an intimate, sneaky, and slightly indulgent glow while emphasizing the glitchy, danceable beats that made me look really weird while I mixed tracks at Starbucks.”