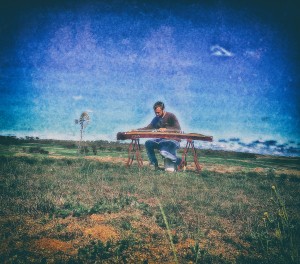 Target Archery’s stunning 2017 debut, The Clock of the Long Now, unwinds over 40 blissful minutes, weaving a suite of glimmering musical tapestries that expand beyond the borders of conventional guitar pop. Headed by Ambrose Nock (Apricot Rail) and featuring contributions from Apricot Rail members Justin Manzano (production and instrumentation) and Jack Quirk (guitars), Clock of the Long Now explores the fertile realm of delicate, experimental post-pop, influenced by the likes of Sound Dust-era Stereolab, left-of-centre indie-pop bands such as Lacto-Ovo, The Go! Team and Ninetynine, and a dash of late ’80s Sonic Youth.

Why are we telling you all this? Because we cornered Ambrose and asked him to pull three questions out of the bag!

While it’s hard to go past Sonic Youth playing Daydream Nation in full, it’d have to be Gersey at the Rosemount many years ago – they were an incredible live band, especially in a small venue.

Build your own dream supergroup.

I’m going to go with They forgot it in people by Broken Social Scene. Theres so many layers and little parts of it where they’ve just pushed things to their limit – things that you don’t notice at first but the character of the record has a lot of thought behind it. Without setting out to be, it’s almost a summation of all the techniques and things that were good about mid 90’s experimental guitar music, but with a lot of energy and delicacy thrown in.