Chloë March is a songwriting force to be reckoned with. Not necessarily the most obvious way to introduce her gorgeous and delicate music, but more appropriate than it would seem on the surface. March’s ability as a composer and 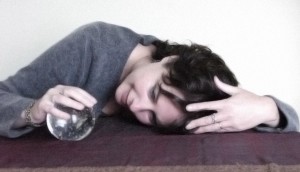 producer sees her create songworlds alive with feeling, shape and colour, and ringing with emotive energy. There is no better testament to this than on the forthcoming re-release of her album Nights Bright Days (4th November 2014), which inhabits musical territory somewhere between art song and folk, dream-pop and electronica, the ambient and the cinematic. March embraces all these influences to create an album full of poetic, emotionally charged and intensely atmospheric songs. It is a thing to behold.

So without further adoration we ask Chloë to reach into the bag and pull out three questions.

It’s so all-encompassing, it engages my brain, my body and my heart all at the same time, which is probably why it feels so good when it’s going well and so awful when it isn’t. I really hope that my music can engage with all or some of those parts of the people who are into it – there’s nothing quite like knowing that you’ve managed to make that connection.

My dream job would have been scoring Cary Fukunaga’s film of ‘Jane Eyre’ with Michael Fassbender and Mia Wasikowska. It’s one of my favourite books and such a brooding, spacious film with gorgeous bleakly epic melancholy landscapes, fantastic actors and so many undercurrents of passion to score. I also think it would be wonderful to work with the director Joe Wright. His use of music reminds me a bit of Anthony Minghella’s – there’s such a big impact made with the score in his films, it’s really given this wonderful amount of space which must be amazingly rewarding for a composer.

At the moment that would be seeing Goldfrapp for the first time earlier this year. They were playing in the grounds of Greenwich Naval College in London so the setting was fantastic, flanked by these venerable old buildings with the Thames and the lights of the city twinkling in the distance. It was freezing and raining but I was so excited to be finally hearing them live I went into a kind of trance. The musicians were brilliant and I’ve always been blown away by Alison Goldfrapp’s voice but I am now seriously in awe of her technique – she was very relaxed and free despite the cold, her range is phenomenal and her velvety tone is so gorgeous, she makes it all sound so easy. I love her performing style too, this sexy mix of confidence, shyness and wit. It was a beautiful show, really emotional and some great dancing at the end – I’m going again in November to hear the whole of ‘Tales of Us’ done live, so I suspect that might be the new best show!