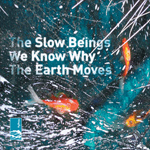 Hidden Shoal Recordings today announced the CD release of the debut album We Know Why The Earth Moves by Perth-based ante-indie rock outfit The Slow Beings.

Out of the ashes of some of Perth’s finest indie bands (The Bamboos, The Rainyard, The Healers, Header and the still-active Tangled Star) The Slow Beings may well be one of indie rock’s new shining lights. On their masterful debut We Know Why The Earth Moves The Slow Beings have managed to channel a range of pop and rock influences into something that is uniquely their own… Shifting from Smiths-esque guitar stylings to driving, hook-laden indie rock and country-tinged indie pop, often during the course of one song… The Slow Beings have an innate knack for re-inventing the edges of indie rock and pop, demonstrating reverence for its form and power yet irreverence in its handling. Press Release Excerpt

Last month I raved about The Slow Beings’ single choice from this album, ‘I Waste The Sea’… It’s a cool opener… The neatly titled We Know Why The Earth Moves holds 10 songs of sparkling indie pop/rock. Magnificent and grand, yet down to earth in sound and attitude… a strong debut. Luna Kafe

The album is available now through the Hidden Shoal Recordings online store in both CD and digital formats and a full press release can be downloaded here.

The CD release comes just two days before The Slow Beings launch We Know Why The Earth Moves at the Rocket Room in Perth, Western Australia on the 28th of June. The band will be supported by the awesome talents of Hidden Shoal Recordings artists, Chris Mason and Toby Richardson.