Tangled Star's "Let's Adjourn To The Garden" Out Now! 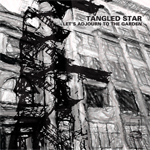 We’re extremely excited to announce the release of Tangled Star’s fantastic new album Let’s Adjourn To The Garden. The album is available in limited edition CD and digital formats (FLAC + MP3) with all CD orders through Hidden Shoal coming with an immediate download of the album (FLAC or MP3). You can stream and purchase the album now at the Hidden Shoal Store and also download the brilliant first single ‘Head In The Sand’.

“They make me think of some of Flying Nun’s kiwi poppers, and briefly a fuzzed and rockier The Go-Betweens. This is indie pop at its best. Sugar-coated, yet a bit raw. Rich-sounding and many-flavoured. A true pop gem.” – Luna Kafe on ‘Head In The Sand’ Single

“blessed with an acute ability to have you all at once marvelling aglow in subdued awe at the spectacle of their delicately calibrated caress like airy drift pop while simultaneously drawing you low amid the affecting undertow of bruised hurt… that self same cosy toed bitter sweet melancholia of wallowing crestfallen country tweaked tides that at one time a few years ago appeared to be the sole trademark sound of both Pavement and Garlic. Tasty stuff.” – Losing Today on That Time EP

Let’s Adjourn To The Garden sees Craig Hallsworth’s Tangled Star project shift gears while continuing to distill the inimitable songcraft Hallsworth is so well known for.  Tracks such as ‘Head In The Sand’ and ‘Hasn’t Made For Freedom’ streamline Tangled Star’s brilliant hooks and melodic turns into immediately addictive and electric slices of slow burn power-pop. ‘Attic Space Conversion’ exemplifies Tangled Star’s compositional and stylistic shifts even more, stitching rousing ramshackle rock with almost Doors’esque cosmic guitar pop. And there amidst the fuzz and driving drums lay some quiet gems in the beautifully stripped back, drumless guitar pop of ‘99% Ok’ and ‘Someone’s Walking’. Just when you think you have the album pegged, the final track ‘Theme’ takes a left turn employing sweeping synths and electronic percussion in some sort of beatific yet melancholic final postcard to the world.