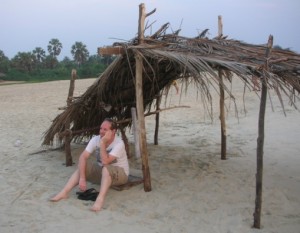 While few would dispute the importance of music in film and TV, I wonder how many outside the industry understand the machinations and the people that make it happen? Cue the music supervisor, who acts as a bridge between the vision and the music, and on a more practical level, the label/artist and the director/producer.

Steve Griffen has worked as a music supervisor in the US on such diverse projects as It’s Always Sunny In Philadelphia, Hot Tub Time Machine 2, We Are Marshall, the upcoming Mr Robinson (starring the awesome Craig Robinson), and many more. We’ve had the pleasure of working with Steve on the 30 Days In May documentary, which features nine songs from the Hidden Shoal catalogue, and we know he’s an in-demand, busy man, so we thank him greatly for taking the time to answer the following questions:

How did you get into music supervision?

It was actually forced onto me…somewhat.  I worked primarily as a music editor in the beginning, and was editing on a television show when the network tried to force all of the shows to start using in-house music supervisors by not allowing supervisors in their budgets.  The producers were used to having a supervisor attached to the production and offered me a raise to handle the supervision (since I was already employed as the music editor).  There is a lot of crossover between editor and supervisor responsibilities, and the in-house supervisors did the ‘heavy-lifting’ when I called on them, so it made the transition somewhat painless.

What’s a day in the life of a music supervisor like?

The day always starts with reading a lot of emails over coffee.  When I have time, I download the new music sent to me and try to give it a listen while travelling.  I may have spotting sessions, concept meetings or mixes to attend.  Whenever something music musical is taking place on the set, I am usually there as well. The rest of the time is spent auditioning songs against scenes, drafting requests and licenses or handling music editorial, which I also do on most of my projects.  I go out to see bands a few nights a week as well in an attempt to stay current.  One of the job perks is getting tickets to most of the shows that are happening every night in L.A.

I realise this must vary from project to project, but is there usually a specific point in the production process where you’re brought in? Does the point at which you join a project affect your approach?

It varies with each project, but I like coming in at the scripting phase.  That allows me to avoid licensing pratfalls early on take part in a musically creative component of the job.  If I get brought in after something is already shot or edited with music attached, the job is more about doing my best to fit the existing music into the budget or finding replacements for what cannot be licensed.  Nobody is ever happy having to replace the music they have been living with, so those jobs can be problematic.

What’s been your favourite music placement and why?

For the 100th episode of ‘It’s Always Sunny In Philadelphia’, they shot an intricate ninja fight sequence.  We spent a lot of time trying out different songs for it and really loved “Smack My Bitch Up” by The Prodigy.  There was a little back-and-forth with the band initially since they did not know the show, but after we forwarded them some episodes, they agreed.  The publishers and label are all great people to work with, and the song worked on so many levels with the obvious nod to ‘Charlie’s Angel’s’.  Plus, the song was misunderstood by a lot of people who took offense to it when it was released, similar to how ‘Sunny’ is often received.

Without telling tales out of school, what was your hardest sync?

I’d have to say “Mama Said Knock You Out” by LL Cool J.  There are a lot of samples in that track and even the samples have other samples in them.  The pile of paperwork that it created made me feel guilty of deforestation.

Do you ever have to argue the value of a particular song to a director?

Constantly.  It’s rare for everyone on a project to see eye-to-eye on music.  It can be a polarizing topic that everyone wants to weigh in on.

I’ve heard it said, partly tongue in cheek, that music supervisors are the new A&Rs, and I know that many enjoy the ability to bring new music to new ears. Has this changed the way you think about your role or your choice of music in any way?

I don’t think my though process has changed because that’s how I’ve always viewed the role of a supervisor.  I transitioned out of the record industry into TV/Film and had the chance to see guys like Danny Bramson doing more for the artists I worked with in the 90’s than the A&R department. I love seeing bands break after a great placement in one of my shows.  It makes me feel still connected to the record industry in a small way.

How do you find the music you need for a project? Do you scout for music outside of a project to keep things tagged for future projects?

The music comes from all over the place, usually.  Raiding the iTunes playlists of the interns on the show, seeing new bands in L.A., temp music from the editors, music scripted into the scene, etc…

I don’t really tag things for the future because that never seems to work out.  Same with scripted music.  It rarely ends up in the final cut.  Producers and directions want to hear options and opinions from others.  I have a somewhat photographic memory for songs so I’ll watch the scene down without music once it’s cut and sometimes I just know the song that’s needed.  Then we are back to topic #6 above where I have to fight to keep it.

Can you tell us about the upcoming Mr Robinson project? (We’re big Craig Robinson fans!)

The pilot for that was done before I started ‘Hot Tub…’ and it’s still not in production!  It’s supposed to be a mid-season replacement for this year so I expect it to start up soon.  I can tell you that it’s based mainly on Craig’s real life as a struggling funk musician when he was starting out.  He played on the recordings we did for the pilot and I engineered/produced those sessions.  Hoping that his music remains a big part of the final show because I would love the chance to utilize my engineering skills regularly.  Record budgets don’t usually allow for time in big studios anymore so the only way I get to sit behind a nice recording console is when I’m recording for TV/film projects.

What’s spinning on Steve Griffen’s turntable at the moment?

Literally on the turntable?  I think that’s probably “Dark Side of the Moon”, but the turntable is pretty much there as a conversation piece in my office.  The top 10 recently most played songs on my iPhone are from Muse, Jimmy Eat World, Tame Impala, The Roots and Jack White.  Okay…there’s a Tears for Fears song on the list too.  Not sure how that fits into the above list.