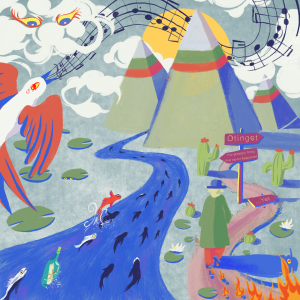 On their debut release, The Greatest Thing That Never Happened… Yet, Swedish trio Otinget deliver a mesmerising suite of songs, blending delicate folk, strident post-rock, lilting Americana and brooding slowcore – plus a special guest appearance by Dungen lead guitarist Reine Fiske. The album is available now via Bandcamp, Spotify and all other good online stores and streamers. The music of Otinget is available for licensing for film, tv, web and more via Hidden Shoal.

On title track and first single, Fiske helps build the song from its gentle rollicking intro to its feverish conclusion. Opener ‘The Sea’ weaves mesmerising, spidery guitar lines before the bassline references the Hendrix classic ‘Hey Joe’. ‘The Vagabond’ manages to seamlessly fuse math-rock guitar lines with a bluesy swagger, highlighting both the band’s songwriting smarts and their formidable ability as performers. ‘But Something Came Over Me’ is a brooding slice of atmospheric pop, building up and falling away in equal measures over its runtime. And the album closes with ‘Further’, a majestic re-working of a song by one of Otinget frontman Erik Nilsson’s other projects, The Slanted City