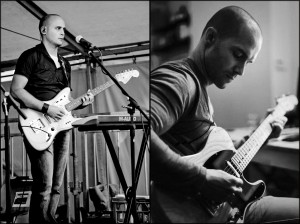 Hidden Shoal fans will be delighted at the news of our signing of dream-rock architects of The October Solution. Although the band name may not be familiar, its members certainly will be: The October Solution are Drew Sullivan (Slow Dancing Society, City of Satellites) and Jarrod Manuel (City of Satellites). While steeped in ’80s nostalgia, their music moves beyond familiar tropes to stand as defiantly futuristic and progressive. As you would expect from Sullivan and Manuel’s lineage, their songs resonate with soaring guitars, ethereal vocals, and deftly woven pop melodies, melding the incandescent ambient sounds of Slow Dancing Society within the propulsive songcraft of City of Satellites.

The band’s debut full-length, Axis Swim Scar, will be released through Hidden Shoal on the 15th of April, with the first single dropping on the 25th of February. Hidden Shoal will also be releasing a deluxe re-issue of the band’s first two EPs later in the year.