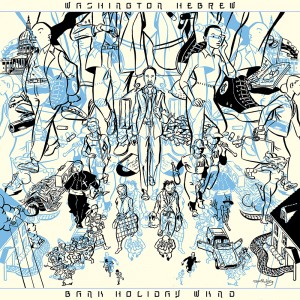 Good times, people! You can now get your first taste of the wild and wonderful self-titled debut from Washington Hebrew (Michael Kentoff of The Caribbean). ‘Bank Holiday Wknd’ is the perfect intro to the Washington Hebrew universe, with its dizzying psych/space jazz and Kentoff’s trademark vocals. The track is available now as a free download via Bandcamp and can be streamed via SoundCloud.

Having performed in The Caribbean since 2000 and with no pressing desire to go ‘solo’ or work outside that secure, familiar context, Washington Hebrew acts as both a leap and bridge for Michael Kentoff. Inspired by his use of samples and loops for installations, remixes and soundtrack projects, Kentoff has employed these raw materials to craft new songs akin to the wonderfully skewed and melodic pop of The Caribbean, but with a magic all its own.