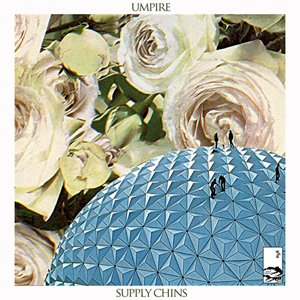 On an album crammed to breaking point with hooks, ‘Supply Chins’ has perhaps the catchiest hooks of all. Alternating between a massive fist-pumping chorus and reflective verses, the song builds towards a breathtaking climax punctuated by sumptuous horns, weaving vocals and driving guitars. This is indie-rock at its most unashamedly anthemic.

Umpire combine sprawling indie-rock sounds with reflective melancholy, expertly wielding massive sun-drenched melodies, serpentine guitar parts and soaring vocals to spectacular effect. From singles ‘Green Light District’ and ‘Supply Chins’ through the chiming guitar surge of ‘The Canyon’ to gorgeous finale ‘Cyclones Into Sunshowers’, Now We’re Active is a stunning release, as expansive as it is propulsive, as heartbreaking as it is life-affirming.