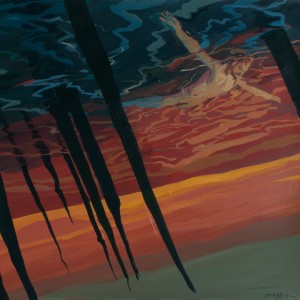 Hidden Shoal is excited to present ‘Beneath a Soft Clearing’, the expansive first single from No Anchor, the third album by ambient artist Memorybell. The track is available to stream on Spotify and SoundCloud and is also accompanied by a live performance video as part of January Skies, an event hosted by the Colorado Modular Synth Society in February 2021. No Anchor will see release on the 7th of May 2021 through Hidden Shoal. The music of Memorybell is available for licensing through Hidden Shoal.

Memorybell is the ambient project of Grant Hazard Outerbridge. From 2003 to 2008, he played bass, keys, and occasionally sang in the band The Very Hush Hush. In 2010, under the name Grant Hazard, Outerbridge self-released Genus Euphony, a solo effort of classical piano infused with subtle electronics. In February 2014, Outerbridge awoke in a hospital with no memory of how he had arrived. He was diagnosed with transient global amnesia. When he returned to the piano, Outerbridge found his previous compositions sounded garish, so he pared them down to their essence and, along with new, more spacious material, constructed the debut Memorybell release, Obsolete. This was followed in 2020 by Solace, a meditation on nature and stillness that prominently features modular synthesizer. No Anchor is his third Memorybell release.