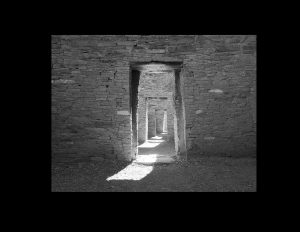 Hidden Shoal is excited to present the new single, ‘Astro-Geo Alignment’, from US experimental pop project Rewilding. The track is lifted from the forthcoming album Abandoned Kiva, which will see release on April 8th in digital and CD formats with pre-orders now available. The single and accompanying music video is available now to stream and watch. The music of Rewilding is available for licensing for film, tv, web, games and beyond via Hidden Shoal. Check here for more info.

With Alexandra’s vocals in the mix alongside Jake McFee’s own, Abandoned Kiva shares musical DNA with Broadcast’s Tender Buttons, where haunting voices weave amid dense, dark musical hallways, flickering with the promise of revelation while perpetually dodging out of reach. Single ‘Astro-Geo Alignment’ typifies the album’s charms, as rickety rhythms are held together by hazy guitars, synths and voices, warping the listener’s perception of the music’s temporal and spatial dimensions.