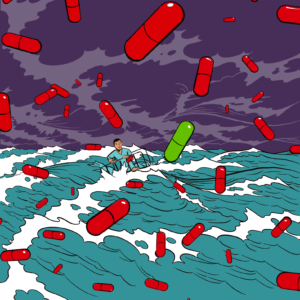 Hidden Shoal is excited to present the new Liminal Drifter single, ‘Box Seat’, and it’s beautiful accompanying music video by Perth based film maker dQ (aka Dennis Collins). The track is lifted from Cortisol 22, the fifth album by the Perth-based ambient electronica artist, which will see release on 19th September 2022. Download ‘Box Seat’ via Bandcamp, stream via Spotify and the rest. The music of Liminal Drifter is available for licensing via Hidden Shoal (film, tv, web games etc). Check here for more details on licensing this music.

Though shot through with undeniable beauty and hope, the music on Cortisol 22 is shadowed by a number of serious health issues faced by Simon Order (aka Liminal Drifter) over the last couple of years. The album title refers to the hormone produced by the body during stress – something that Order faced repeatedly after experiencing a heart attack in late 2020. While recovering in hospital, Order began working on the music that would form Cortisol 22. The resulting album is an hour-long exploration of music as balm and recuperative destination.  Opener ‘Child’s Play’ is a deceptively emotive slice of chilltronica, drawing on some of the dub vibes of 2020’s Connected, while wrapping the whole thing in a blanket of ethereal nostalgia. Latest single ‘Box Seat’ is a sun-drenched sonic playground, with an insistent acoustic guitar line, intricate percussive details and beatific electric piano. ‘Cut Out’ is clean and shimmering, punctuated by golden horns and keys, with a positive momentum counterbalanced by the bittersweet taste of leaving something behind. And ominous Boards of Canada vibes are woven into standout ‘Once a Day’.