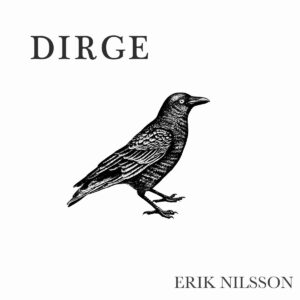 Dirge, the fourth instalment of Erik Nilsson‘s Notes and Sketches series, draws together and expands on material generated though Nilsson’s engagement with the Disquiet Junto Project. The EP is available now via Bandcamp and can be streamed on Spotify et al. The music of Erik Nilsson is available for licensing (film, tv, web etc) via Hidden Shoal.

The title track is a short moody instrumental featuring the electric guitar as both lead and percussion instrument. Phrase Switch Etude is built up of a series of interlocking phrases, played with various techniques on an acoustic guitar, followed by a time-stretched and, through various other means, mangled ambient remix of the title track. The collection closes with a remix of ‘Rumore de Roma’, off of Nilsson’s debut album Recollage.