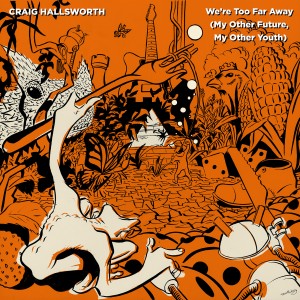 We’ve been itching to give you a taste of the sublime debut album from the inimitable Western Australian songwriter Craig Hallsworth and now the itching can cease! ‘We’re Too Far Away (My Other Future, My Other Youth)’ is the first single lifted from What’s The Story With This Hole? which will see release on the 24th of October 2016. Many will know the man from some of Perth’s pivotal seminal outfits such as The Bamboos, The Healers, wild palms, Zuvuya, Outstation, The Slow Beings, Tangled Star so this solo outing should rightly come with some level of excitement and expectation. We can guarantee that you’ll have your expectations and me and your appetites whet! Stream the single here and download it for free here. More on the new album below.

It’s this juxtaposition that makes What’s The Story With This Hole? so special – musically rich and familiar sounds taken into unrelated narrative territories. In Hallsworth’s own words, “To me, the mysterious undecidability in the words plays a crucial part in the overall experience of the songs, making them events of sense and sensation. It isn’t so much that I consider the lyrics to be poetry, but I think a sense of poetry would be useful in approaching these songs.”

“Craig Hallsworth knows his way around a tune with this set of sparkling power-pop, set with a country twang and cosmic touch” – 2ser on Tangled Star’s album Let’s Adjourn to the Garden