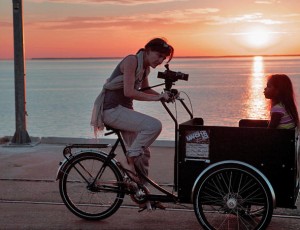 Check out the first short film installment for the wonderful film portraiture series Mobile Moments 3.0 featuring a soundtrack by Hidden Shoal’s PERTH. The project is presented by The Blue Room Theatre Summer Nights as a part of Fringe World 2015.

Created by Sarah Nelson, the project was conceived in 2011 for an artist residency with DADAA Inc. and was developed over a month working with youth from the Derby and Mowunjum communities in the Kimberely, Western Australia. In 2012 the project was presented as a part of the inaugural Proximity Festival, which offered not only a starkly contrasting environment as a backdrop for the films, but also a paying adult audience to the experience. The project returns for The Blue Room Theatre Summer Nights program for Fringe World 2015. Mobile Moments 3.0 will merge these extremes and play with the possibilities of chance encounters across the city. Searching the streets and approaching participants only when a moment reveals itself, the artist is out there to connect and capture with a diverse cross section of the Perth community.

MOBILE MOMENTS 3.1 from ROAD on Vimeo.