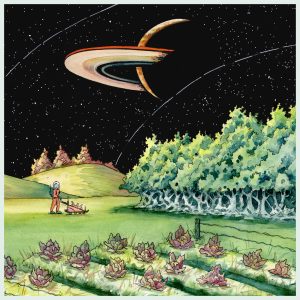 Hidden Shoal is proud to announce the release of Glass Garden, the beautiful fourth album by American neoclassical minimal ambient artist Memorybell. The album is available now to purchase in CD and digital formats from Bandcamp and to stream and download from Spotify, Apple Music and all other good online music stores. The music video for album track ‘Here’, by Australian artist Cam Merton, is available to stream via YouTube. The music of Memorybell is available for sync licensing via Hidden Shoal.

Created during lockdown and inspired by the science fiction narratives of The Stars My Destination and Silent Running, the new album confronts the ache of loneliness and isolation with a healthy dose of hope. As Outerbridge explains, “At the start of the lockdown, I existed in a state of unease… I revisited many of my old, unreleased recordings, searching for inspiration… I chose four songs that sit well together, tweaked and manipulated them, and created three new, complimentary tracks. Something new from something old. Not a revolutionary concept, but a comforting one, when faced with an existential threat.”