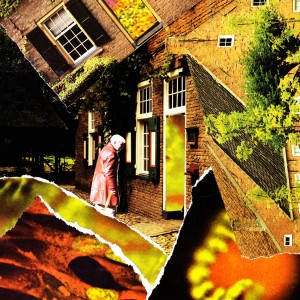 We’re excited to announce the release of Blue Herons, the new split 7″ from Karl Blau & The World of Dust. These two gorgeous tracks will be released through the wonderful Tiny Room Records with licensing of The World of Dust track ‘The Life of Gods’ through Hidden Shoal. The vinyl is limited to a run of 200. Head to the Tiny Room Records Bandcamp to buy and head to Spotify, iTunes and the rest to stream and download. Check out the video for ‘The Life of Gods’ via YouTube and stream the track on SoundCloud.

Karl Blau (USA) and Stefan Breuer from The World of Dust (NL) cross paths when they perform together in an old mill in The Netherlands, September 2017. Being a longtime admirer of Blau’s work (both solo and with The Microphones, Laura Veirs and LAKE), Breuer was touched by the unfiltered niceness and sincerity of the person behind this music. They stayed in contact and decided to make a record together.

Karl Blau recorded his side of the vinyl ‘Slightly Salted’ in Germantown, Philadelphia, where he currently resides with his family. The song was originally written by Bryan Elliott and recorded by his band Pounding Serfs in 1989. Since then, it more or less became the theme song to Anacortes, Washington (also the home of Mount Eerie and Beat Happening). The lovely, seaside village of Anacortes was Blau’s home for 25 years, until his recent move to Philadelphia. Spiritually he may still be found in Anacortes of Skagit Valley, northwest Washington State.

Four years ago, Stefan Breuer and his family moved out of Hoograven, Utrecht to a nearby village called Bilthoven. Hoograven is a grey neighbourhood with a lot of flats, sandwiched between two busy highways. Apart from the uninspiring surroundings, the vibe was unfriendly and hostile. Eventually, Breuer and his wife decided not to raise their kids in Hoograven. In Bilthoven they found peace, serenity, and woods. The first half of ‘The Life of Gods’ is about Hoograven, the second half is about Bilthoven.

The music of The World of Dust is available for licensing (film, tv, web and more) via Hidden Shoal. Contact us for more details.