Half Film Reissues Out Now on CD and Digital! 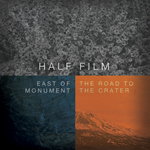 Hidden Shoal Recordings is proud to announce CD and digital availability for the reissue of two late 90’s slowcore masterpieces East of Monument and The Road to the Crater by San Franciscan trio Half Film. Both albums are available together as a specially priced double CD and singley in digital formats. All CD orders come with an immediate download of both albums.

Head to the Hidden Shoal Store to grab your copy now and stream both albums in full. To get you in the mood the track ‘Machines, Hawks And The Perfect Equation’ is also available fro free download.