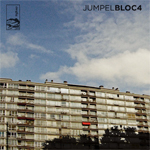 Following on from the attention received from Textura for Liam Singer’s Arc Iris, another Hidden Shoal artist is also making waves at the site. Jumpel’s stunning release Bloc 4 has just received a glowing review and was chosen as one of their releases of the month,

“On this album, Jumpel’s secret weapon is—aside from his own artful scene painting—vocalist Chloë March (with whom Dürbeck collaborated on “Edinburgh” from the Europa single), whose humanizing presence elevates every song on which she appears. Her sensual vocalizing acts as a dramatic counterpoint to Dürbeck’s instrumental designs, which by comparison epitomize cool control…Sans vocals, Jumpel’s music plays like some distinctive merger of ambient, post-rock, and krautrock, with piano, guitar, bass, percussion, and electronics woven with great care and circumspection into polished miniatures. Melody abounds but it’s deployed subtly and acts more as part of the overall fabric than as a focal point. Stated more generally, Dürbeck emphasizes intimacy and understatement in the album’s fifteen meticulous constructions. On a commercial level, such an approach likely lessens his chances of making a huge splash, but artistically it pays off handsomely.” – Textura

Check out Bloc4 and grab the first two singles from the album for free at the Hidden Shoal Store.