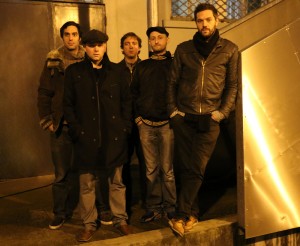 Hidden Shoal is excited to announce the signing of the awesome French outfit Les Limbes. Born from the ashes of a number of previously active bands from Bordeaux, south west France (Beautiful Lunar Landscape, Nihil, Nucold), Les Limbes build on their heritage and elevate it to new heights. Their music is all about propulsion and atmosphere, creating epic, rocket-fuelled post-rock’n’roll woven together with heavy guitars, soaring strings and driving pianos. The five piece comprises Arnaud Sigonney, Yoann Roy, Daniel Guerin, Julien Favreau and Nicolas Pointeau. Les Limbes’ soon-to-be-released debut self-titled EP is testament to the band’s ability to not only write smart compositions, but also bring them to life with incredible energy and a stratospheric sound.

The Les Limbes EP will be released in April 2015, preceded by a single in March. Check out the very teasing teaser below and read more about the band here. The music of Les Limbes is also available now for licensing (film, tv, web, games and more), so be sure to contact us if you’d like to have a listen for your upcoming project.