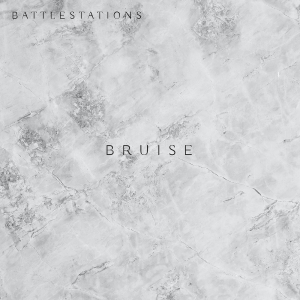 Hidden Shoal is proud to announce the release of Splinters Vol II: Bruise, the epic new album from shadowy instrumental project Battlestations. The album is available to download via Bandcamp and the first track lifted from the album, ‘Unelind’, can be streamed via SoundCloud. The music of Battlestations is available to license for use in film, tv, games, web etc via Hidden Shoal.

Without the focus of the human voice, it’s all too easy to label instrumental music as “cinematic”; instead, Splinters Vol II: Bruise justifies this label by presenting a masterfully handled sonic analog to cinema. The album is a wonderful marriage of texture and melody, the earthly and the cosmic; this is visceral ambient at its very best – tactile and sublimely transportative. Opening track ‘Bruise’ is a perfect example of Battlestations’ complex and multi-faceted craft, slowly building over its 23 minutes like a slow-motion tsunami, drawing together musical elements as it pushes toward an unseeable horizon. Like the unrelenting yet mesmerizing opening scene of a Christopher Nolan film, ‘Bruise’ takes the listener by the hand and pulls them into the frame. This momentum is wonderfully sustained for the album’s duration, the album music refusing to recede into the background, but rather demanding the listener’s full attention.