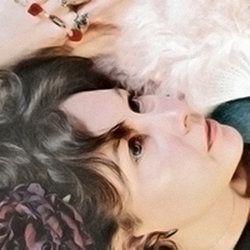 Hidden Shoal’s re-release of the breathtakingly beautiful Nights Bright Days by Chloë March has finally landed. To co-incide with the re-release the companion digital EP Under The Day, which features six previously un-released tracks, is available for free download. Head to Chloë’s Bandcamp to buy the album on CD and digital formats and get your free copy of Under The Day.

Although often compared to singular artists such as Nina Simone, Beth Gibbons and Elizabeth Fraser, Chloë March follows her own unique path, writing, engineering and producing from her studio in south-east England. Inhabiting musical territory somewhere between art song and folk, dream-pop and electronica, the ambient and the cinematic, March embraces all these influences on Nights Bright Days to create poetic, emotionally charged and atmospheric songs and soundworlds.

Four years in the making and originally self-released in 2013, Nights Bright Days is a cycle of songs as dreams, imbued with imagery of darkness and light, night and day. The album embraces elements of jazz, classical, folk and dream-pop, and features guest musicians on bass clarinet, soprano sax, French horn and guitar. Nights Bright Days features single ‘Winter Deep’, a shimmering waltz that opens the album with weightless grace.