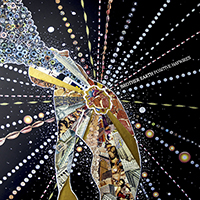 Hidden Shoal is proud to announce the release of Positive Haywires by American duo Brother Earth. To coincide with the release we also have another treat for you in the form of a new music video for the fantastic album track ‘Planet Wednesday‘. Positive Haywires is also now part of the Hidden Shoal licensing catalogue and is available for all film, tv, web and games projects.

Brother Earth brings together the formidable talents of multi-instrumentalist Todd Tobias (Circus Devils) and vocalist Steve Five (The Library is on Fire). On this their debut album for Hidden Shoal Brother Earth’s shadowy, kaleidoscopic music vacillates between brooding textural pieces and exuberant rock-and-roll at the drop of a hat, chasing the ghosts of pop music past into a hall of cracked mirrors. The album’s wonderfully elastic aesthetics shift from dark and broken to sunny and playful in a matter of songs, while maintaining their own warped and beautiful logic. The album features the previously released singles ‘Out Like a Lion‘ and ‘City of Gold‘.

“It’s surprising and experimental, and quite beautiful.” – Backseat Mafia on ‘Out Like a Lion’