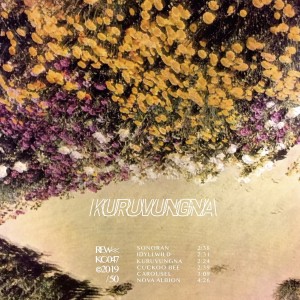 We’re excited to present ‘Sonoran’, the first single from Kuruvungna, one of two forthcoming EPs from US artist REW<<. The track can be streamed via SoundCloud and it’s accompanying video can be veiwed via YouTube. The Nagiere and Kuruvungna EPs will see cassette and digital release on 3rd December 2019 through Katuktu Collective and Hidden Shoal with pre-orders available now.

REW<< (Ryan Weber) follows up the release of May’s Salix Babylonica EP with two further neo-classical EPs of exquisite poise. Like the sound of post-ambient duo A Winged Victory for the Sullen unfurling in time-lapse, each EP feels like a melancholic soundtrack to an unseen nature documentary, wistful, mesmeric and full of detail. Rather than aiming for expansiveness, the discreet and patient nature of each track makes its own subtle yet profound gestures, creating a set of miniature interconnected ecosystems that reward close listening.

REW<< is the solo moniker of Ryan E. Weber, who originally hails from the Western shores of Lake Michigan. His previous bands include Camden, The Promise Ring and Decibully, and he is one half of dream-pop duo Eric & Magill. Working on Eric & Magill releases while living in both Kenya and the Republic of Armenia, Weber collaborated over the internet with a host of notable contemporary indie artists, including members of Shearwater, The Dirty Projectors, Owen, Volcano Choir and The Delgados.

The music of REW<<  is available for licensing for film, tv, web, games and beyond via Hidden Shoal. Check here for more info.