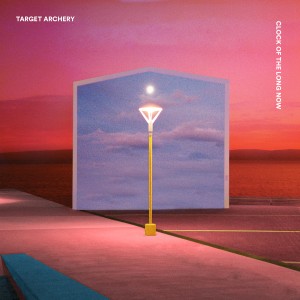 Hidden Shoal is proud to announce the release of Clock of the Long Now, the debut album by Perth-based post-pop project Target Archery. The album is available for purchase on vinyl and as a free download via Bandcamp and will be out on Spotify, iTunes and all other good 3rd party stores soon. The album will be launched at the Rosemount (Perth, Western Australia) on October 20.

Featuring contributions from Apricot Rail members Justin Manzano (production and instrumentation) and Jack Quirk (guitars), Clock of the Long Now was crafted in an isolated studio in rural Western Australia over a period of three years. Across 40 blissful minutes, Target Archery weave a suite of glimmering musical tapestries that expand beyond the borders of conventional guitar pop.

“The might of, I dunno, Mogwai is still there, but the charm of Múm is also present. They paint mountains in broad strokes but afterwards they take time to put in Sherpas and goats partying on the cliff face.” – Love Is My Velocity on Apricot Rail