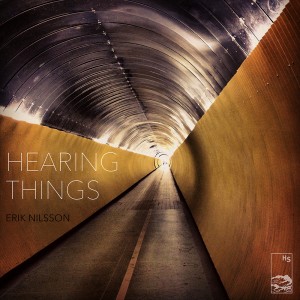 Hidden Shoal is proud to announce the release of the stunning new track ‘On and Onward’ by Erik Nilsson, the first single from his forthcoming album Hearing Things (30th July 2015). The track is available for streaming via SoundCloud and download at BandCamp.

The direct emotive power of ‘On and Onward’ comes from the simple accumulation of pristine instrumental elements: shimmering chimes, resonant piano chords, a driving kick drum, and a glitchy, echoing hook. The elements build and play off each other with clarity and precision, resulting in a track of deceptive power and resonance.

Erik’s previous work includes the album Recollage, originally released by Luxus-Artica Records, and the score for Ahmed – Almost 13, a Norwegian documentary screened at the prestigious International Documentary Film Festival of Amsterdam. His music can be heard in Project Power, which chronicles civic resistance to privatisation in New Brunswick, Canada, and in Are You Still There?, finalist in the 2011 edition of the short film competition The 24 Hour Film Race. Erik is a regular contributor to the Disquiet Junto Project, an online collective exploring the creative potential of constraints. He is also singer and guitarist in folk-rock trio Otinget, whose debut album will be released in 2015.