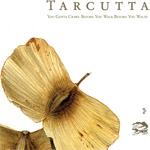 Hidden Shoal Recordings today announced the release of the single ‘You Gotta Crawl Before You Walk Before You Waltz’ by Melbourne-based instrumental rock trio Tarcutta.

‘You Gotta Crawl…’ unfolds into being with a luminous pattern on 12-string electric guitar, the low hum of Hammond organ, and a delicious brushed drum pattern. Gradually, delicate organs runs are stirred in before the song seems to fall away, then changes direction and builds into an eddying spiral of tumbling melody. All three instruments bob and weave expertly before building into a subtle climax that will make the hairs on the back of your neck stand up. After over six minutes the song gradually rumbles to a close – leaving your jaw on the floor, hungry for more.

Tarcutta draw inspiration from rock, punk and post-rock to create their own distinctive and emotive blend. The subtle ebb and flow of their compositions, the complex interweaving of guitar, organ and drums, and the raw immediacy of the playing, captured live in the studio, distinguish Tarcutta as an essential band. Inspired by Sonic Youth, Theodore Adorno and sporadic bushwalking, Tarcutta formed in North Fitzroy, Melbourne in late 2004. Peter Barrett (drums), Justin Buckley (guitar) and Justin Wheelahan (Hammond organ, piano) recorded their self-titled debut album at Head Gap studio, Melbourne with Casey Rice, who has worked with Tortoise, Dirty Three and Hidden Shoal’s very own Fall Electric.

‘You’ve Gotta Crawl Before You Walk Before You Waltz’ is available for free download from the Hidden Shoal Store until the digital release of Tarcutta’s self-titled album on June 23rd, followed by a CD release in July.