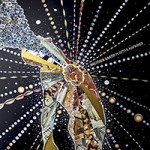 Brother Earth‘s first cut from their forthcoming album Positive Haywires (September 16th) has been reaching ears and gaining love. ‘Out Like a Lion‘ was a recent featured download on two of our favourite mp3 music blogs, Largehearted Boy and Faronheit and has just been reviewed on the wonderful zine, The Modern Folk Music of America.

“…another in the list of MFOA submissions that happen to be on the formidable hidden shoal imprint… i must admit that i was a little star-struck to receive an email from todd tobias, as he is known for producing several bob pollard/guided by voices records… moody and atmospheric, ‘out like a lion’, the lead single from the forthcoming brother earth LP ‘positive haywires’, simultaneously drives forward while it oozes out around the edges. the song is anchored by an insistent clicking percussion track punctuated by swelling cymbals and a plucked classical guitar, fleshed out by various ambient touches, creating a dark mysterious room for the sleep-talking, trance-like vocal. a mystical freak folk trip.” – The Modern Folk Music of America

Grab the single as a free download from Brother Earth’s Bandcamp site.