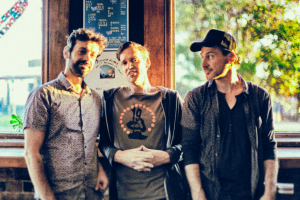 Hidden Shoal is excited to present ‘Rains’ is the aching first single from Omens, the debut album by Australian band Alpha Hall.The track is available via SoundCloud and Bandcamp and the accompanying music video can be streamed via YouTube. Omens drops on the 12th of October 2018.

A plea for love in the face of fear, ‘Rains’ exerts a devastating emotional pull. Layers of guitar and violin interweave beautifully, while the rhythm section ratchets up the tension and Baz Petrovski’s weathered vocal tone deepens the atmosphere of weary resilience.

“mesmerising, with dusky vocals, purring violin, and a rich melodic and rhythmic interplay that erupts into emotional climaxes that ambush and satisfy in equal measures” – Doug Wallen on Alpha Hall, The Big Issue

Alpha Hall traverse a unique sonic landscape, somewhere between The National’s brooding songcraft and Dirty Three’s violin-streaked majesty. Their cinematic debut album, Omens, conveys many shades of light and dark, veering from delicate and introspective to unnerving and expansive. It captures a band able to convey not only the rugged beauty of their surroundings in regional Australia, but also the complex nature of our tempestuous times.

Alpha Hall’s music is available for licensing across film, tv, games, web and beyond. Hit us up for more info.