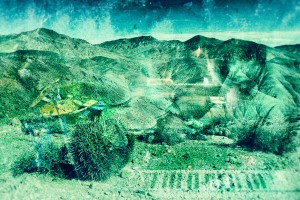 Connected View produce trojan horses. On first listen their output is littered with seemingly innocent, naive late-night instrumental jams, but on each successive spin you begin to notice the patterns and the purposefulness. By this time the woozy, rolling melodies have begun to mesmerise and before you know it you’ve fallen through the wormhole. Kinetic synths, sinuous basslines, live drums and found sounds intertwine to create an atmosphere akin to eavesdropping on Boards of Canada improvising with Fridge. Playful, dirty, brooding, radiant and rhythmic. Magic stuff!

The best show we’ve been to was Stereolab opening for Sonic Youth at the Electric Factory in Philadelphia in the year 2000. It was a crossroads in many respects. We were young and impressionable and it changed our view of music henceforth. At the time, we were huge Sonic Youth junkies, had been for years. We had heard of Stereolab, but never really investigated. Their set blew us away. It was a lot of stuff from the Microbe Hunters/ Cobra era. From there on we were Stereolab fanatics. It was just what we needed at that time. The next day I went to the record store and bought everything by Stereolab that they had in stock. Instead of noisy guitar-based music, we started seeking out more synthy and baroque stuff. We dug into the types of music that inspired the Stereolab sound and sought out decades worth of influences and then the influences of the influences. Kraut, psych, electronic, edm, tropicalia, different styles of jazz, synth pop, shoegaze, ect. We loved it all. Its been like peeling an onion. That show set us on the path to eventually making our own music.

We’ve been asking ourselves that question forever as well. Not sure its ever been adequately answered or ever will be. It doesn’t have to be. Whenever I ask myself this question I think of a few of my acquaintances who are not creative, or not involved in art in any way, and I just couldn’t imagine living that way, without a creative outlet. It seems like a pointless existence. Sometimes I wish I could go without music, it would save us a lot of time in editing. I’ve realized that whenever I feel down or I am having some difficulties in life, I turn to music more. It is the great escape. Other artists I’ve read in interviews have said things like “it’s the search for the unknown, a beautiful mystery that you get to unfold.” We can go with that too. There’s some kind of nervous energy within us that can only be released through music.

One of our favorites that has seemed to be in the rotation for a long, long time & probably isn’t well known is Movietone’s ‘Blossom Filled Streets.’ We enjoyed all of Movietone’s output, but this one most. I was instantly drawn in by how it sounded as if it was recorded on the beach and the ocean imagery imbedded within. It enlightened me to the idea of concept albums beyond the proggy stuff I had previously been exposed to. It helped to form my concepts of what an album is supposed to be. A cohesive group of songs with a central theme tying them together. A theme, but also similar instruments and a style spread over a group of songs. When I hear ‘Blossom Filled Streets’ it connects me to moments and places over many years and now has that nostalgic importance that some albums obtain. To describe the sound to someone who hasn’t heard it would be difficult. The album is kind of a post-rock-ish array of horns, rhythm section, electric guitar, keyboards, bass, and sea sounds with great singing and lyrics.